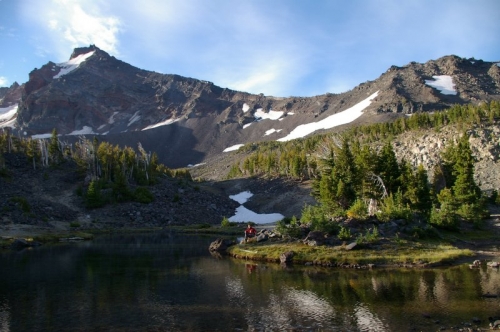 The trail is a horse pounded dusty trail for the first couple of miles. It actually drops overall from the TH which I believe is about 6400 ft to Park Meadow which is 6161 and (44.11361, -121.70417) and about 3.5 miles distant. You cross 3 streams on your way to Park Meadow. After crossing Park Meadow, follow signs for Green Lakes (trail veers to the left). Just shy of a mile from Park Meadow, there is a trail to the left marked by a cairn on either side of the trail. I believe the trail intersection is about at (44.10999, -121.71578) but that\'s looking back at my track on the GPS and guessing a bit). Follow this about a mile to Golden Lake (44.10306, -121.7144, elev 6640). Golden Lake is nestled between the mountains and ridges. I think it\'s Broken Top but it may Broken Hand with views of the Middle Sister and other peaks. We had great sunset views. The moon set the next morning right over a mountain. It was very nice. Where the creek enters Golden Lake, hike up the trail about a mile to a couple of tarns below Broken Top. AWESOME views. If you go around the 1st tarn on the right to the 12 o\'clock position continue another 50 yds or so to the 2nd tarn. They\'re at about 7100 feet. A good side trip if you\'re spending the night is to hike to Green Lakes which lies about 3 miles further down the trail with great views of the lakes, Broken Top and the South Sister. I guess if you\'re really ambitious, you could climb the South Sister but I wasn\'t that ambitious. The 12 miles RT is to Golden Lake proper. The tarns add another 2 miles and Green Lakes would add 6-7 RT. It\'s a very nice area. Green Lakes tends to get crowded though. People hike in from the Cascade Lakes Hwy.

The trail summary incorrectly states the distance is12miles one_way. Twelve miles is the round trip distance to Golden Lake!