From Port Angeles, drive west on Highway 101, past Lake Crescent to Sol Duc Road. Turn south and follow this for 13 miles to a large parking lot and trailhead at its terminus. 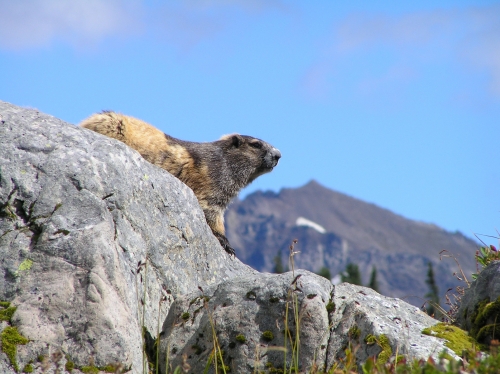 This is one hell of a hike. The trail leads past beautiful waterfalls, stunning alpine lakes, and jaw-dropping views of Mt. Olympus and it’s many glaciers. Several days should be spent exploring the high country, the many lakes, and soaking in all of the amazing views.

The Sol Duc River Trail follows the river for the first 5.5 miles passing several nice waterfalls, including Sol Duc Falls after the first mile. Past the falls, the crowds start to thin out, and the true wilderness begins. The trail grade stays pretty tame throughout the valley bottom and under beautiful old growth forests of Douglas Fir and Hemlock. Views are limited in this stretch, but the churning River and green, dense forests offer plenty.

At 4.5 miles, the trail reaches a junction. For High Divide, stay straight on the main trail. The trail to the left heads up to Appleton Pass, a worthwhile trip, but only after you experience High Divide! Continuing past the junction, the trail passes sevenmile shelter before crossing the Sol Duc River on a high log bridge. The trail grade now steepens, as it switchbacks along Bridge Creek and the forest thins out to give way to alpine meadows. The surrounding peaks to the east, as well as Mt. Appleton and Appleton Pass to the north offer dramatic surroundings. After 6.5 miles, the trail enters Soleduck Park where there are several good camping sites, and a couple shelters.

The trail continues up the glacial-carved valley, eventually reaching shallow heart lake before beginning its last set of switchbacks before High Divide. Once on top, Mt. Olympus captures the full southern half of the sky, with its enormous glaciers flowing into the forested valleys below. High Divide during late July or Early August is full of wildflowers and meadows creating the perfect foreground for the amazing Olympus Background!

The next two miles offer much of the same, as the trail stays along the ridgeline, eventually making a turn around Bogachiel Peak, and a side trail to Hoh Lake and the Hoh River Valley. Continue Right at the intersections and continue another mile as Olympus recedes behind forested ridges until reaching a side trail leading to the Seven Lakes Basin. Because the lakes are on the north side of the ridge, Olympus does not create a backdrop for these lakes, but the smaller peaks and meadows still give this region a very mountainous and beautiful look. Snow often times lingers very late into the summer on this north-facing face, and the lakes have been known to be ice-covered well into August! There are many places to camp in the basin but tread lightly in this heavily used area.

After exploring Seven Lakes Basin, continue as the trail descends along the northern ridge of the Bogachiel River Valley. The ridge is covered with meadows, and be sure to keep your eyes open for black bears grazing along the hillside. The trail eventually turns north and descends to Deer Lake, a nice, quiet little lake nestled under the rolling hills of the range.

The trail leaves Deer Lake along its northern shore. Be sure to look at an impressive waterfall shortly after Deer Lake along Canyon Creek. Two and a half miles past Deer Lake, the trail reaches Sol Duc Falls. Turn left past the falls, and return to the trailhead.

See, I told you this was one hell of a hike…its definitely better in person since my description doesn’t come anywhere close to portraying the grandeur of this place!

Fantastic hike! Be sure to budget some time for exploring the 7 Lakes Basin and Sol Duc park. I did the loop easily in 3 days, but wished I had more time to explore. Saw plenty of wildlife on this hike as well..
Great hike, beautiful area! There were alot of bears the weekend I went 8/28. One thing to remember is that this trail is a high use area and you will have to check in with the ranger station and let them know what camp sites you will be at each night. This takes a bit of planning, you may want to call ahead.
High Divide definitely is one of the best hikes in the Northwest. You should spend a full week exploring this great area of the Olympics.
This is an amazing trail...definitely the best in the Olympics, possibly the best in the whole Northwest.