From Stevens Pass, drive Highway 2 for 19 miles until reaching the turn for Wenatchee Lake (Just past the 59er Diner—good hamburgers and shakes). Cross the bridge, staying left to the Wenatchee Ranger Station and another 2 miles to a left turn. Continue on this road (Little Wenatchee Road) for 15 miles to its end and the Little Wenatchee Ford Campground. 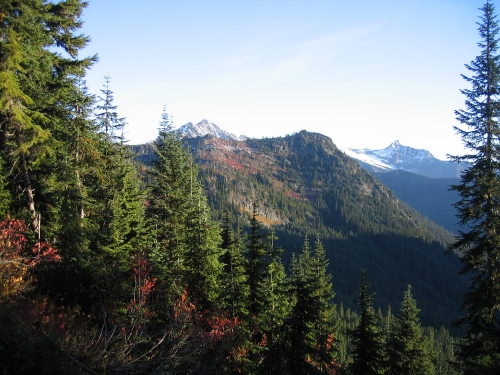 The Little Wenatchee River-Cady Ridge Loop is a great, short loop trip traveling through the Henry M. Jackson Wilderness. The views of the surrounding mountains are superb, (we even had good views on the cloudy days when we hiked the loop—I’ll be back to see what I missed), and the abundant meadows are great any time of year, but especially during the early summer when wildflowers are in bloom.

Starting from the Little Wenatchee Trailhead, follow the path through the woods, continuing past a fork to the right for Poe Mountain. The trail stays mostly level as it makes its way up the valley bottom, alternating between meadows and small stands of trees. The first meadows start fairly close to the trailhead, satisfying that craving to see what the valley looks like early on in the hike. However, these meadows can be very brushy.

Four miles in, the trail crosses a small stream, and a nice little campsite at the edge of a large meadow before beginning its ascent up the northern wall of the valley. The climb can be rough at times as the trail rises almost 1400 feet in a little under two miles. If hiking the trail during the lat summer, the first of the blueberries start along this climb…some much needed motivation at times and an excuse to take some quick breaks. After topping out at just over 5000’, the trail drops slightly to arrive in Meander Meadow. Look for fat marmots scurrying around on the rocks; their shrill yells generally give their locations away. There are several great campsites in the basin and even a pit toilet on the eastern side of the meadow.

To complete the loop, follow the trail through the meadows and up the southern ridge of the valley, meeting the Pacific Crest Trail in a mile. Supposedly, the first views of Glacier Peak are gained on this section (again, since it was cloudy on our trip I’ll have to rely on other people’s images to see the glorious views I’m sure I missed).

Turn south (left) onto the Pacific Crest Trail following it to Dishpan Gap and past trails leading to the Skykomish River and Blue Lakes. The trail leads past Wards pass and switchbacks down to meet the Cady Ridge Trail, 3.5 miles from Meander Meadow. Take the half-mile side trip along the Pacific Crest Trail to Lake Sally Ann and several nice campsites.

Continuing with the loop, follow the Cady Ridge Trail from the Pacific Crest Trail as it drops to a small saddle and a nice campsite with a great views (possibly even of Glacier Peak). The trail rises through open meadows with more great views as it rounds the southern edge of 5816’ Cady Peak (actually it doesn’t really have a name, but I think that fits) before dropping back into larger trees on it’s eastern flanks. The ridge alternates between forests and meadows its entire length, before beginning it’s descent. Much of the descent is fairly gradual at the beginning, but soon gets rough as the switchbacks get steeper, and shorter and thoughts enter my head about how glad I am for not hiking this in the other direction….anyways, after some wobbly legs and toes being crammed into the front of your boots, the switchbacks get longer and gentler, eventually reaching the Cady Creek Trail. Follow this for a half-mile, over the beautiful Little Wenatchee, and up a small rise back to your car.